The bell and its use

On the third floor of the tower hangs a bell dating from 1732 which is chimed every date at 1200 by the children from the primary school.

On the bell can be seen a letter P which stands for ‘PRUFUNG’, a wartime reference to the German bell requisitioning from 1943 onwards. Bells marked with P are examples which would later be further investigated. If the bells proved to be of great cultural worth, they would be exempt from requisition. Anloo was unlucky; the bell was removed by the Germans. Fortunately, it was discovered after the war in Hamburg, on 5 December, 1945. The bell was cast by De Grave & Nicolaus Muller of Amsterdam. Alongside the name of the bell founders, can be seen the coats of arms of  HENDRIK JAN ELLENTS and BARELT HOMAN, both members of the town council, Etstoel and church council.

Two bell frames can be found in the tower. The old bell frame dates, probably, from the 16th or 17th century and hung previously in the tower. After the Second World War, a new concrete attic level was built into the tower on which a new bell frame was placed, built by Van Bergen of Heiligerlee in 1944. The old bell frame was preserved.
The bell is chimed by the church warden and his wife and, on every school day at 1200 by children from the school opposite the church. This is an old tradition, telling the land workers and farmers that the time had come to eat. 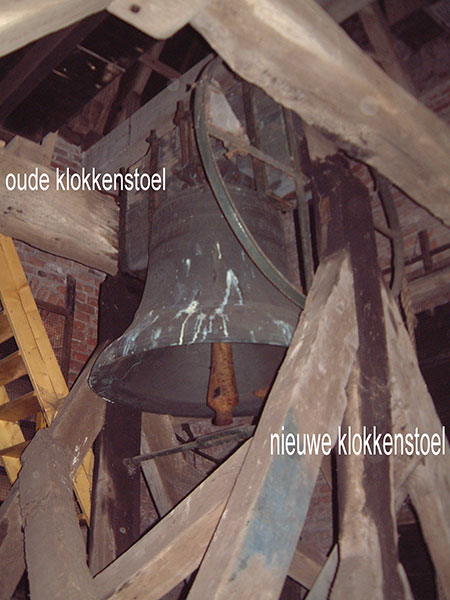