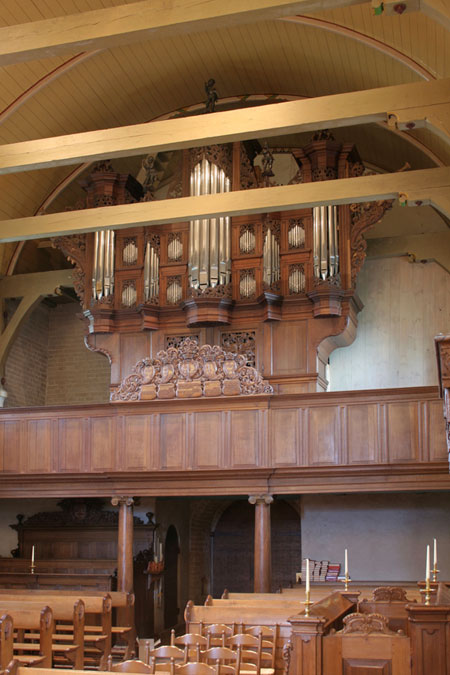 The Radeker-Garrels organ was gifted to the church in 1717 by the Ellents family. The contract for the organ was awarded to  Johannes Radeker and Rudolf Garrels. Both were foremen in the workshop of Arp Schnitger on the Gelkingerstraat in Groningen. The contract was signed on the 5th of March, 1717. The price of the organ was 1.450 Carolus guilders. On the 16th of October, 1718 the organ was played for the first time.

On the 6th of March, 1944, Mense Ruiter began a large-scale restoration which was finally completed in 1950.  Restoration in this context is, in fact, a misleading term as the organ was not returned to its original state. Although the organ was carefully restored according to the knowledge and understanding of the time, the artistic aspect of the work is now viewed rather differently. The organ comes from the Schnitger school and should sound as such.

Thanks to initiatives taken by the 'Muziek in Anloo' Foundation in the 1990s, the organ could be restored once more. The foundation ensured that the Radeker-Garrels organ would be restored according to the contract from 1717. In June 2001, the organ was once again taken into use. The final inspection by Prof. Dr Harald Vogel took place on the 15th of March, 2002.

The restoration of the organ in the 1990s

Henk van Eeken, an organbuilder from Herwijnen, restored the organ together with his team of colleagues. The project began in 1990 with the goal of reconstructing the organ’s original state as accurately as possible. The point of departure for the restoration was the surviving contract from 1717. Unfortunately, a large proportion of the pipework was lost in a fire in the builder’s workshop in 1995 and, thereafter, attention focussed more on reconstruction than restoration. 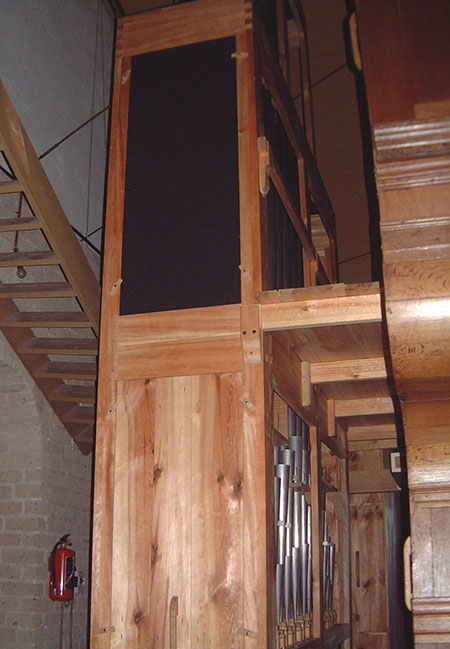 The organ was delivered in the late 1990s after which a four stop independent pedal was added behind the case in 2002. As there was no electricity in 1717, the village teacher acted as both precentor and 'calcant' with the tough job of pumping the organ’s bellows.

The original sound of the instrument has been recreated as closely as possible during the restoration/reconstruction project. Henk van Eeken’s involvement in the activities of the Göteborg Organ Art Center' were of pivotal importance in the project’s success. GOArt is an international research centre for organ history, organbuilding, education and performance practice, attached to the University of Gothenburg in Sweden.

As a result of scientific research, GOArt have reconstructed countless processes and techniques from organbuilding history and evaluated them on their worth and reliability. A broad, international forum of experts participates in this research.

This rediscovered knowledge and skills were used by Van Eeken during the reconstruction of the Anloo organ. As a result new organ pipes could be made entirely according to the original techniques used in 1717. The organ metal was cast on a bed of sand and the sheets then planed exclusively by hand in order to achieve the required thickness.